Coinbase has gone on a spree of developments and additions on to its platform that have included the addition of four more Ethereum tokens. The tokens Dai (DAI), Golem (GNT), Maker (MKR) and Zilliqa (ZIL) will be included on to the Coinbase Pro platform albeit coupled with regional restrictions.

vGNT and DAI will be accessible in the United States, with the exception of New York, in the United Kingdom, the European Union, Australia Canada, and Singapore. The other two tokens i.e. MKR and ZIL will be available in the above-stated regions with the exception of the United States. Going by announcements made by Coinbase, other jurisdictions could be added at a later date. Also, the exchange will be rolling out the same for its main platform, coinbase.com, and its mobile applications at a later stage.

Three of the newly added tokens are ERC20 coins (DAI, MKR, and ZIL) while GNT is based on the Ethereum network but has not been officially declared an ERC20 coin. Coinbase has said that the addition of these tokens is a fulfillment of its promise to add more ERC20 coins onto its platform.

The press release issued by Coinbase stated that the token’s smart contract functionalities would not be available on the platform at this time. Due to this, the statement continues that any users looking to either take part in MKR governance, utilize their tokens in the Golem Beta network, exit DAI or use the different functionalities of the tokens will be required to move their tokens from the platform on to a local wallet. 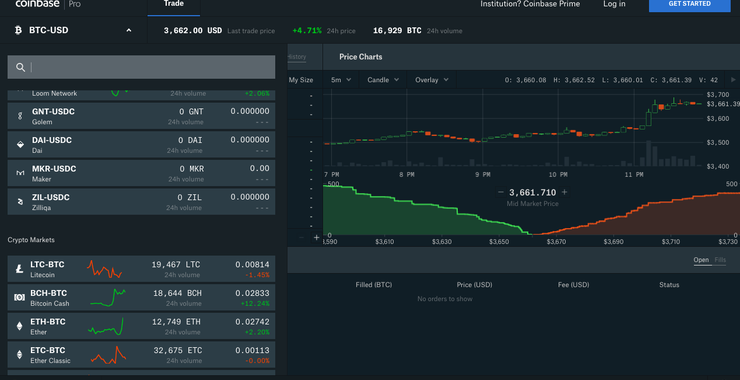 The tokens will be active as at 11.45am Pacific Time on the 18th of December from which time it will be possible to transfer any of the four tokens onto the platform. Trading using the tokens will then be possible twelve hours after this time and after the platform confirms liquidity. Trading will be beginning with a USDC pair. A tweet by the firm confirmed that transfers would be available at the stated time in the supported regions.

The tweet also reiterated that for the first twelve hours order books would only be transfered and therefore users and traders would not be able to place orders and as a result no orders would be filled.

This announcement has been received with a mixed reaction within the Crypto community. Many Crypto enthusiasts on Twitter were asking the firm to look into adding Ripple (XRP) and Stellar (XLM) on to the platform. Another Twitter user requested the platform to refrain from adding the Waves coin stating that they would like to see the platform continue to improve.

Coinbase is already looking into adding more tokens onto the platform, both those that are ERC20 and those that are not. In the first week of the month, the firm added several other coins including MANA (Decentraland), CVC (Civic), LOOM (Loom Network) and DNT (district0x). It is also reportedly looking into supporting XRP from Ripple.

Binance Is Setting Up A Blockchain Education Center

Israel Shows its Support for Cryptocurrencies